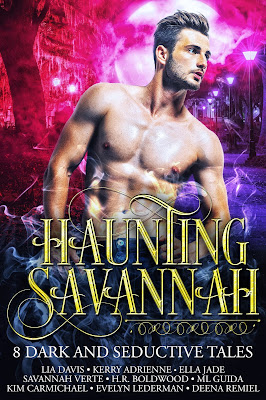 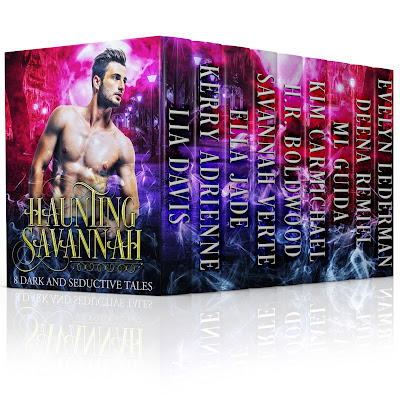 Ghost in a Bottle by Lia Davis & Kerry Adrienne
Anatoli La Croix has spent the last century cursed to exist in spirit form, locked inside a glass jar. When the beautiful and magickal Ophelia purchases the jar, he discovers he’s able to escape his confinement for short periods. For the first time in a century, he has hope. Could the beautiful witch be the one to break his curse? Or will she provoke the evil spirit that imprisoned him and bring dark magick’s wrath down on them both?

Forbidden Union by Deena Remiel
It’s Halloween in Savannah. Noah Blackman has come to Savannah, Georgia and Violet Adams’ home seeking to verify the origins of his family.  Could his roots begin with a runaway slave? This trip holds many surprises for the two as their family’s pasts collide and their present charts a course for romance and lasting love.

True Companions by Ella Jade
Maxim and Grant have been lovers for a century. Companions in the truest sense. What happens when a human woman shares their home and their bed? Can two destined souls open their hearts to a third?

The Ultimate Act of Love by Evelyn Lederman
The last thing Kori Daniels expected to see on a ghost tour is an actual apparition. Although she can feel earth-bound spirits, she has never seen one. Already impacted by nightly amorous dreams since arriving in Savannah, her dream lover now has a face.

The Haunting of Bellehaven by H.R. Boldwood
Self-reliant Harper McKinnon arrives in Savannah to claim her inheritance, Bellehaven Plantation—a proud antebellum estate. But the estate’s handsome caretaker, Clay Montgomery, is used to doing things his way. Fireworks fly as they are drawn ever closer, but the plantation’s ghostly secrets threaten both their love and their lives.

The Promise by Kim Carmichael
A mistake brought a demon to her, a promise kept them bound together.  It is a thin line between desire and love and good and evil when an incubus enters Leora Desmond’s life.

Veil Break by Savannah Vera
Taken from the world he knows, to a place out of time, Holden Henry has a lot of questions when he is redeposited into his world, 150 years in the future. His Savannah isn’t the same anymore.

Rosalind Gill’s stepfather is the culprit. He’s forcing her to remain silent and marry his evil partner or die. Her only hope is Phearson MacFie-a vampire pirate from another time. They must work together to not only save the innocent, but save themselves and discover true love.


Newsletter: http://eepurl.com/6ICXv
Posted by Unknown at 7:30 AM No comments: 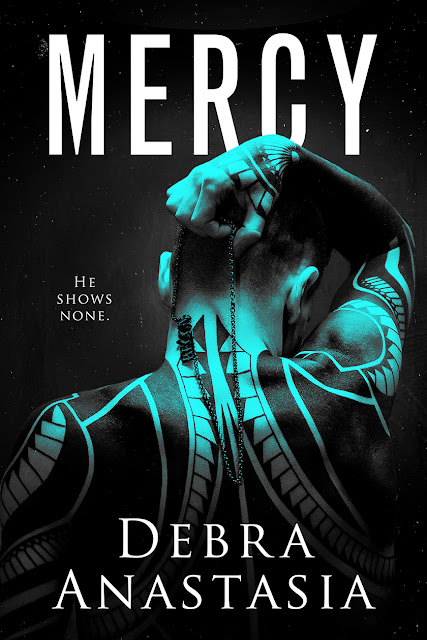 
He taught me to kill. Murder is in my blood now. It runs through my veins and though I hide the monster I see in the mirror with ink, it doesn’t keep him from coming out.

My street name is Mercy, but I never show any. Except for her. I watch Becca, though she doesn’t know. She saved me a long time ago; the day my father killed my mother. Her bravery turned her into a target.

My father holds a grudge and knife with the same proficiency, and Becca is the focus of his hatred. And I’m the only monster who can save her. 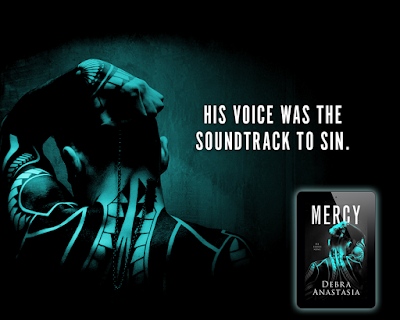 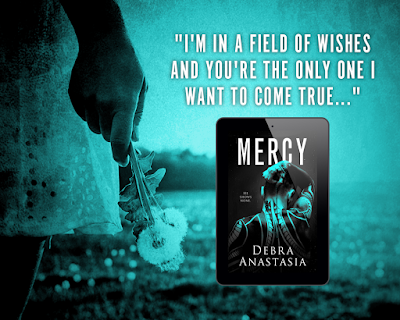 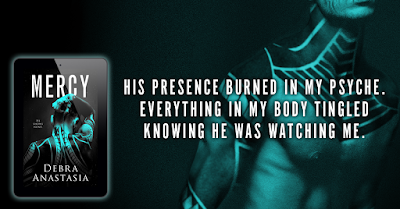 Debra Anastasia likes to write from her heart, her soul or her butt. The genres she dabbles in are examples of that. There are two paranormal romances in the Seraphim Series and now four contemporary romances in the Poughkeepsie Brotherhood Series and a stand alone in the same genre, Mercy. Fire Down Below and Fire in the Hole, Booty Camp Dating Service and Beast complete her comedy repertoire. The Revenger, a dark paranormal romance, is finally in the light, and the last, a novella called Late Night with Andres, is special because 100% of the proceeds go to breast cancer research.

Debra lives in Maryland with her two kids, husband of twenty years and two dogs. The king of the house is clearly the tuxedo cat that is the size of a small donkey. Find about her latest adventures on DebraAnastasia.com 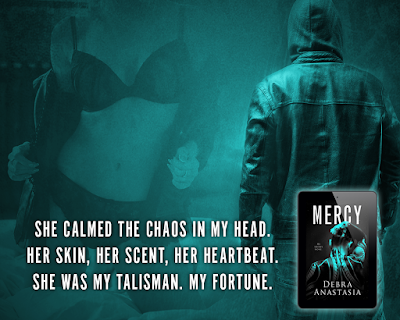 Posted by Unknown at 7:00 AM No comments:

Director Simon Tvelgar is haunted by a lost love.
Annnnnnnd Rosie is about to get the chance to head up a new Black Swan unit, D.I.T., The Department of Interdimensional Trespass.


Twenty years ago Sir Simon was a vampire hunter. He took three month’s bereavement leave to go wild camping in the far north of Scotland following the death of his team leader. He expected solitude and fresh air to clear his mind and heart. He did not expect to fall in love. While picnicking on the stark landscape of the Orkney Islands, she disappeared into the standing stones. He turned just in time to see her fading into nothingness, a look of panic frozen on her face. As she reached out and silently called his name, he lunged to grab her an instant too late.

She was gone. But her memory has haunted him every hour since.


Simon channeled his sorrow and loneliness into work until he eventually rose to the most powerful position ever held by an ex Black Swan knight. With tireless dedication, he built a congregation of talented misfits, watching and waiting for the one who could find Sorcha.

“You’re a very good cook, Simon. Some woman is goin’ to be lucky to have you for a mate.”
“I don’t know. I think perhaps on balance my less desirable qualities might outweigh my cooking skills.”
“What are your less desirable qualities?” Simon opened his mouth to answer, but she changed her mind. “Ne’er mind. I do no’ want to know. For tonight I want to believe that you’re perfect. A god fallen to Earth from that star,” she looked up in the sky and pointed, “right there.”
“Suit yourself,” he smiled.
“How old are you?”
“Twenty three. How old are you?”
“Twenty nine. You seem much older. I would’ve guessed that you’re closer to my age.”
He smirked. “Vampire hunting ages a person.”
“You’re stickin’ with that vampire huntin’ business, are you?”
“That’s my story.” His casual nonchalance would never be taken as cover for the truth about his occupation.
She rolled her eyes. “How long are you on holiday?”
“I’m not exactly on holiday. A friend died. He was a close friend, more like family really. So I’m out here to…”
Watching him struggle to find the right words, she offered, “Clear your head and free your heart?”
If Simon had spent a year contemplating how best to answer why he was there, he would not have been able to come up with a more perfect and concise description of his reasons. He didn’t answer, just reached over and pulled Sorcha close enough to him so that he could kiss her the way he’d been thinking all through dinner. With the firelight reflecting on her face, she had him believing that she was the goddess who likely fell to Earth from the brightest star in the heavens above.
It took little urging to get her to scoot closer a look of sensual anticipation on her face.
“You done this before, human?”
Simon smiled sardonically. “Couple of times,” he said just before pressing a soft kiss to her mouth. When she deepened the kiss, with an unmistakable flavor of demand and insistence, he chuckled. He’d been thinking sweet and slow. She was apparently thinking eager and faster. He was just as cool with eager and faster. So he let her set the pace.
Flanked by the Atlantic to the west and North Sea to the east, the Orkneys enjoyed a surprisingly mild climate. At least that’s what the travel brochures say. But forties didn’t feel mild if a wet wind whipped up after the sun finally set and sleeping arrangements are outdoors on the ground.
It took a few minutes to figure out how to reconfigure the sleeping bag zippers so that they could take advantage of the combination of modern fiber technology and body heat.
“How can it be so hard?” She laughed.
“It’s like a puzzle,” he replied. “We’re both reasonably bright, well educated persons. We’ll figure it out. Just be patient.”
She growled. “I’m no’ feelin’ patient. I’m feelin’ eager.”

Victoria’s paranormal romances come with uniquely fresh perspectives on “imaginary” creatures, characters, and themes. She adds a dash of scifi, a flourish of fantasy, enough humor to make you laugh out loud, and enough steam to make you squirm in your chair. Her heroines are independent femmes with flaws and minds of their own whether they are aliens, witches, demonologists, psychics, past life therapists, or financial analysts from Dallas. Her heroes are hot and hunky, but they also have brains, character, and good manners – usually – whether they be elves, demons, berserkers, werewolves, or vampires.
FACEBOOK | FACEBOOK FAN GROUP |  GOODREADS FAN GROUP | TWITTER: @vdanann