Blackmailed by A Gorman cover reveal 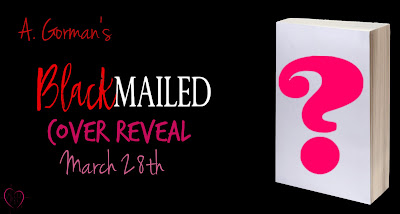 Blurb-
Chet Boston has everything he wants—except love.
Raised as an affluent only child, Chet used his popularity and status to his advantage. While attending Indiana University Bloomington, he falls into the party scene. His drugs of choice? Alcohol, cocaine—and women. He is honest with his agenda. That way no one gets hurt, and he gets what he wants.
His playboy lifestyle comes to an end when he meets Alexis Cross.
Although he enjoys his revolving door of women, when he meets Alexis at a charity dinner, all of that changes. But when she leaves him for a co-worker in California, he trashes any future possibility for romance and vows to get on with his life.
Blood is thicker than water—or so they say.
When Chet discovers he has an older half-sister, Chantelle, life changes yet again. She wasn’t raised with his silver spoon, and it soon becomes clear she is after one thing—money. Chantelle digs up dirt to blackmail him into being a puppet master, and forces him to help her land a billionaire husband.
What he didn’t expect was to meet Jesse McCoy—the billionaire’s daughter.
Chet and Jesse’s fast and furious romance leaves him pinned, and it isn’t long before his life spirals out of control. But there’s one more curveball he didn’t see coming…
And it will change his life forever.