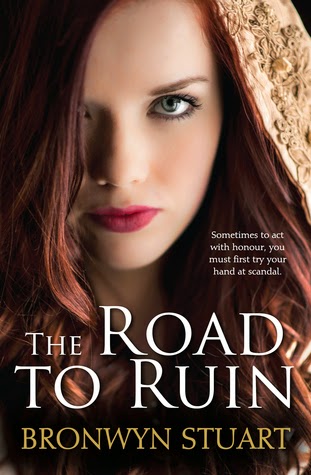 James Trelissick, Marquis of Lasterton, has but one plan: to get his sister and mother back from the notorious pirate who stole them from their ship bound for the Americas, without creating the scandal of the season. After months of fruitless searching, his family name and his sister’s reputation hang dangerously by a single thread. So, taking matters into his own hands, he kidnaps the one woman who must hold some of the answers: the daughter of the pirate captain.

Daniella Germaine’s only wish is to be reinstated to the decks of her father’s pirate ship. She will do whatever it takes to regain his attention after he decides she needs to be a real lady and ships her off to London to find a husband. With disgrace her last option, she tries everything she can think of to scandalise: riding at breakneck speed through the park to win a gentleman’s wager and swimming naked in the moonlight. It’s during another of these deeds of daring that her plans fall to pieces and her future lands in the hands of a man with not a lot left to lose…

Somewhere along the road to ruin, when lives are at stake and hearts are torn, Daniella and James must each decide between what they want, and what they actually need, to really live…

A feisty, sexy historical novel of daring, lust, and finding love in the most unlikely places.

The Road to Ruin is a must read Historical romance. With interesting and unique characters , the author has painted her settings and characters with life and spark.

A smooth flowing plot with intriguing characters and a wonderful setting, The Road to Ruin will be enjoyed by all who enjoy the historical setting and era that the book is set in.

Two unlikely characters embark on a not so planned journey and along the way many many unexpected turns become about.

I enjoyed the banter between the characters and at times I admit I had a laugh out loud moments with the sassy and smart whitted Daniella Germaine .

James Trelissick, Marquis of Lasterton, surely had his work cut out for his with this sassy woman. Trying not only to deny the chemistry between them and protect her as well it surely was a struggle of wills.

Daniella Germaine is sent to London to give up her pirate ways in order to become a lady and find herself a husband. But this is not what she is after. She causes many a scandal so she can get back to her father and his boat - but along the way James Trelissick has other plans.

James has his own background to his story - but the path that he must follows involves a sassy , hot headed woman and the return of something he had had stolen from him.

They both embark on a journey of discovery, passion and danger ..


A scandalous historical romance , filled with passion, danger , lust and intrigue. It will keep you captivated till the very last pages.

Posted by Unknown at 8:09 PM No comments: Links to this post

After We Fell by Anna Todd - Book review Book Three of the After series—now newly revised and expanded, Anna Todd’s After fanfiction racked up 1 billion reads online and captivated readers across the globe.

Experience the Internet’s most talked-about book for yourself!Tessa and Hardin’s love was complicated before. Now it’s more confusing than ever. AFTER WE FELL…Life will never be the same.

#HESSA Just as Tessa makes the biggest decision of her life, everything changes. Revelations about first her family, and then Hardin’s, throw everything they knew before in doubt and makes their hard-won future together more difficult to claim. Tessa’s life begins to come unglued. Nothing is what she thought it was. Not her friends. Not her family. The one person she should be able to rely on, Hardin, is furious when he discovers the massive secret she’s been keeping. And rather than being understanding, he turns to sabotage.

Tessa knows Hardin loves her and will do anything to protect her, but there’s a difference between loving someone and being able to have them in your life. This cycle of jealousy, unpredictable anger, and forgiveness is exhausting. She’s never felt so intensely for anyone, so exhilarated by someone’s kiss—but is the irrepressible heat between her and Hardin worth all the drama? Love used to be enough to hold them together. But if Tessa follows her heart now, will it be…the end? -


You can purchase this book or find any information by following this site .

This series by Anna Todd will consume you at  every page. A smoothly delivered storyline , and at 834 pages long   I  know I am in for a roller coaster ride before I even open the first page.

The author knows how to weave her magic within the pages. The series is huge - the books massive in length but I find that nothing is over stepped, everything within the pages is relevant and wonderfully delivered.

After we Fell picks up where the last book After We collided ends. You are taken on a ride within this story, heartache, angst, love, growth and an anger that will leave you antsy.

The characters are still learning in there relationship, it seems to be a constant battle with secrets and jealousy .. Arguing, and it seems to be going in the same direction on repeat. But saying this they both are learning - in there own ways.

Certain parts can get frustrating - You have to wander if this pair will ever get where they want to be.

They sabotage the love and relationship by repeating past mistakes over and over.. Its like a viscous circle.

This does create interest for me -  the reader - as I can understand the frustration.  We see a darker side to Harden in this book. His anger makes him do things he certainly knows he shouldn't. His actions always have a consequence. * this will make sense when you have read the book *

Tessa seems to also be in a tizzy in this book - she made some really stupid decisions, I as a reader just shook my head over and thought WTF !!! It seems we think Harden is always to blame but in this book you really have to wander they both seem to be as bad as she each other lol.

KEEP READING ! I TOLD MYSELF even though I was pissed off at a certain part.

Even though this book is filled with angst ,hurt, heartache we also see a growth within the characters.  (Depth or course and definition into them.) Maturity and growth plays a strong part.

The love they share is evident - and in the end we do see Hardin make some choices which I found quiet profound. He always seems the weaker link in this relationship but ultimately his love and support take over .. He realizes what he must do to show the one person he loves the most.  Cliché I know.


I love the inner dialogue from Tessa - it gives us depth into her love for Harden and she really does try to understand him and love him even as damaged as he is. And she knows that it is her that he will only ever truly love. ** heart patters **

After We Fell  is my favourite so far  in the series to date.

I love Hardin's flirting and dirty lingo , his stupid comments and banter it always put a grin on my face and I am sure while reading I have that sheepish look on my face (haha. ) Despite the character he is you can't but fall in love with him - a damaged man finding his way around love. With his strong points and weak ones to boot.

Anna Todd weaves a delicious tale of love, filled with many moments that will leave you with your mouth agape.

She brings out every emotion possible within the story , from tears, to swoony drooly moments to anger where you silently curse the stupidity of the characters.

A roller coaster ride so to speak with a WTF ending that will leave you wanting more !!


Thank you to Simon & Schuster Australia for providing me with this book for my honest review.
Posted by Unknown at 6:41 PM No comments: Links to this post