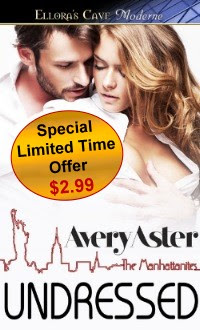 The eBook Deal of the Day:

If you’ve always wanted to experience an Ellora’s Cave novel at a great price…here’s your chance. Undressed (The Manhattanites #1) will be on sale, originally priced at $8.75 and marked down to $2.99 for a limited time at all major e-retail sites. This is a special promotion to in honor of the launch of Unscrupulous (The Manhattanites #2) 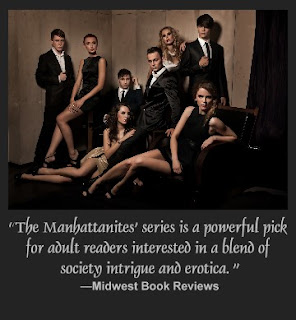 Book 1 in The Manhattanites series.

Milan’s notorious playboy, Prince Tittoni, seems to have everything—Lamborghinis, exotic women, palaces throughout Europe and business success. Ramping up his fabric company to go global with a new apparel brand, he ruthlessly stops supplying fabrics to the American client who inspired the collection. But once they meet, what’s he willing to give to get her in his bed?


Lex’s Louboutins are dug in deep to win this war. All’s fair in love and fashion! 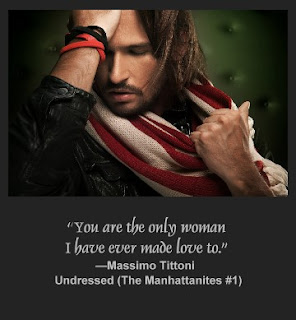 *set-up: Lex Easton is meeting Massimo Tittoni for the first time. Desperate for the fabrics, she has shown up at his summer estate to try and secure them before Fashion Week starts.

Distracted by a strawberry he brought to his mouth, the prince didn’t notice her. But she saw him, those perfect, sensual, full lips and the way his tongue slid out to catch the berry. He popped it in his mouth. Incredible.


Holding her breath, Lex stepped closer, right up to the hedonistic hearth. Why did the sunshine spotlight on her center stage? No monologue prepared, she didn’t think about what she’d say in a situation such as this one. Lex felt sensory overload. It would take every ounce left in her to stay focused on the Easton business at hand, not the Tittoni pleasure around her. Calm your kitty.


At last, the Adonis glanced up and dropped another ruby fruit’s helping into his mouth.    He stood, wrapping a Turkish towel around his narrow hips. The white cotton stretched similar to canvas, ready for a Grecian painter to color something fantastic. “Sì è persa?” he asked as he approached her.


“You must be Prince Massimo Tittoni,” she responded in English. She felt her cheeks tingle with a spark. Excitement waved as heat ran down her breasts, stopping at her pussy. A fierce siren intensified, one which made her want to reach down and touch her clit. She crossed her legs while standing, hoping, praying he’d be clueless as to why.


“Sì. And you’re the fashion designer—” His attempt to tuck in the towel failed and it became loose, revealing his massive cock’s shape. It was decorated with a mighty helmet head for the tip—confirmation the blog’s photos, indeed, were real.


Moist legs clenching tighter, she rolled her shoulders back, raw arousal soaking her panties. Not wishing to make her admiration obvious, Lex focused on his dark eyes. She inhaled a shallow breath and walked forward.


Deep grooves spread across his forehead as he proclaimed, “When we spoke on the phone, I thought you were Signor Easton’s assistant. Today when Roberto announced your arrival, I learned you were Signorina Easton. Our phone call became inaudible.”


Assistant, my ass. “Lex is short for Alexandra and yes, it was me with whom you spoke. I’m the company’s owner.”


Massimo paused then continued, “You were instructed to stay in your villa until dinner, were you not?”


“Yes, I’m sorry, Your Majesty, but I couldn’t wait. It’s imperative we speak. Please afford me a minute,” Lex begged. Balling her hands into fists in an attempt to control her nerves, she became conscious that visiting Isola di Girasoli might be in vain. From his vantage point, she must’ve appeared to be a maniac to have interrupted his vacation.


The prince put his hands on his hips. Beneath the towel, his groin became more visible.


Is he getting an erection? Hmmm. Lex tried her best not to stare, let alone lick her lips, though her throat felt dry. “I’m here for the day,” she added, hoping to persuade him to speed this up by giving him a deadline. “I’m heading back to Sicily tonight, flying up to Milan for an event tomorrow.”


Stepping closer, his large frame overshadowed hers as he spoke, “Lex has it all planned out, guys.” Massimo gave Luigi and his angels a nod to listen and mocked, “Happy we could oblige you on this Italiano fashion tour. Giorgio Armani has a casa a few islands up. You may wish to interrupt his holiday too. Have at it.” His sharp jaw clenched and his eyes narrowed.


Touché, Tittoni. Hard to remain coherent when close to him, he seemed massive in proportions, including muscle, cock, ego and sarcasm. Swallowing air to sober her response, she answered,           “Yes, as soon as we finish here. I’ll be on my way.”


He chuckled in mockery. “Lex, there is no boat service until Thursday. The captain comes twice a week. You will have to stay two nights—unless you can swim back to the mainland. It’s a far distance, even for an athlete.” He studied her up and down and added,             “Which you are not.”


What an asshole. “No, and I don’t pretend to be. Still, I can’t stay. I’ll call a water taxi if I miss the boat.” According to her watch, she was not going to make it.


Massimo’s deep laugh bounced off the pool’s concrete encasement. The girls, now dressed, waited behind him with Luigi. To be dismissed? “The boat has been on the same schedule for more than fifty years and cannot change course to meet your demands.”


The women shifted, growing restless, and the prince turned. “Ladies, Luigi’s getting bored. Get back in the pool.”


His demonstrative touch became warm and strong and confirmed in an instant her entire body wanted him.


Not today. No way. No how. Her brain on the other hand told her to knock it off.


“You and I are getting off to a bad start,” Massimo acknowledged. “It is a pleasure to meet such an accomplished designer. Please accept my apology and stay for dinner.”


“We will discuss Easton Essentials over a nice meal.” His playful fingers touched hers, and Lex became compelled to jump in her Jimmy Choos. But she didn’t.


You’re finger-fucking my palm. You hot pig. But she stood her ground.


He flirted with her to stay the night.


She wasn’t blind and she never played stupid.


What other option spoke to her? Get naked and jump into the pool with Luigi’s girls?        Three against one, she didn’t have a chance. But the prince didn’t pay them much mind.


No matter. Lex must keep this professional. She couldn’t backstroke to Sicily.


“Fine, I’ll return to the villa. See you this evening.” It was difficult to take her eyes off him as she dipped her head in parting, letting his grip go.


“And, Signorina Easton, please dress for dinner.” His mouth twisted into a grin as he sized her up. Dropping the lingering towel, he leapt headfirst into the water. Massimo did a perfect dive, no splash, not even a ripple.


But his plunge wasn’t what impressed Lex. 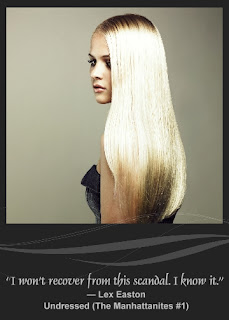 AVERY ASTER pens erotic romance for Ellora's Cave. As a resident of New York's Upper East Side and a graduate from New York University, Avery gives readers an inside look at the city's glitzy nightlife, socialite sexcapades and tall tales of the über-rich and ultra-famous. "I write about what I see in my metropolis that never sleeps--Manhattanites on the quest for a passionate thrill," Avery says. "By and large, my characters are dropdead gorgeous, ripped straight from the headlines and on the hunt for their next conquest." UNDRESSED #1 (Lex & Massimo) launched The Manhattanites series, exploring people's forbidden desires of lust and longing. UNSCRUPULOUS #2 (Taddy & Warner) is the highly anticipated prequel coming August 14,

Tour giveaway details:
Two E copies will also be gifted via the author to two lucky people. Just tell me in a comment what appeals to you about this series. ( new companion prequel Unscrupulous ) will be the e book gifted .


Two winners will receive a $25.00 Amazon gift card. All entries must subscribe to Avery’s newsletter to enter via Rafflecopter to qualify.
a Rafflecopter giveaway
Posted by Unknown at 4:00 AM No comments: 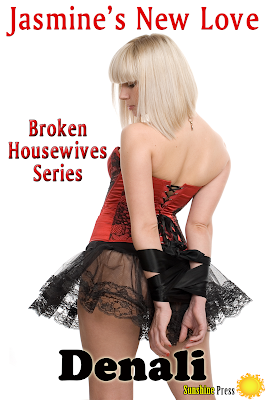 
The monotony of her life has Jasmine questioning her every move. It’s not that she doesn’t love her husband and her kids, she does. It’s just that she aches for something more. Her every day routine has grown a tad boring, and she yearns for some excitement. There must be something out there that will make her life worthwhile.


The arrival of an unexpected postcard soon piques her interest. The thought of letting loose, and having fun draws her in. Her husband won’t be around, and she’ll be able to explore something new. What could go wrong, right?


Thrown into a world where inhibitions fly out the door, and things can happen within the blink of an eye, Jasmine’s life soon takes a different turn. Her new endeavor is the perfect excuse to let her hair down, and enjoy what she’s been offered. When anything is possible, the opportunity must be taken. She now has a chance to explore another side of herself, one she never knew existed.