Someone To Watch Over Me - Jerrie Alexander Book Blitz 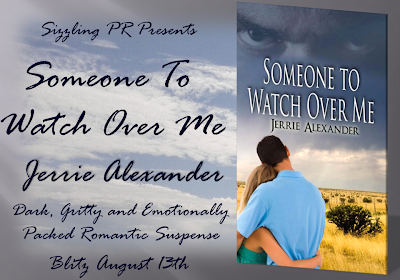 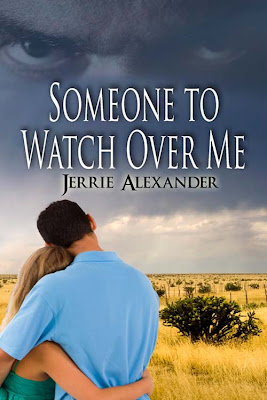 Someone to Watch Over Me


Stacey McKinney returned to her home town to escape a stalker. When people around her turn up dead, she fears he's found her. Is the maniac keeping his threat by killing off anyone who gets close to her?


A different kind of risk is also in town. The man who broke her heart has also come home. Their attraction is stronger and hotter than ever, but he walked away once. Will he do it again?


A bullet ended Cash Butler's career as an Army Ranger. His life on his horse ranch is without complications until he hears Stacey is back in town. He was a kid when her dad used his wealth and power to drive him away. He's not that kid any longer.


When Stacey goes missing, a search proves her stalker had followed her to Oak Hill. But he's dead. Who killed him? And who has Stacey?     Buy link

Focused, Stacey headed across the building on a mission. She skirted the two pool tables, moving faster the closer she got to ladies' room door handle. A chilled raced down her arms. She sensed someone moving in step directly behind her.


A scent stirred something in her memory. Awareness churned through her, warming her skin. Heat rushed to her lower belly. How did her body know to react? She turned to find Cash Butler smiling down at her from under the brim of his black hat.


"Would you look at who I found," his whiskey-toned voice flowed over her skin like caramel over ice cream.


An old familiar zing of desire ricocheted through her nervous system. Twenty-eight was a good year for him. His black hair and stormy gray eyes still framed a chiseled jaw, sharp nose and a mouth made to kiss. Ten years had added a maturity, a road warrior expression to his face.


First loves should never look this good. Never smell this good. And never stand this close.


He leaned down and buzzed his lips across her cheek, liquefying her knees. Blood coursed through her veins, revving her heart rate to race track speeds.


"Hey." Her attempt at casual caught in the back of her throat. "Why aren't you off saving the world or fighting in the war or something?"


"Turns out I'm not bulletproof." His gaze raked over her, settling on her face. "You're looking well."


"So are you." She hated how her body reacted to his nearness. "I need to get back to work. So if you'll excuse me."


"Wait." He stepped between her and the door. "You're the reason I'm here tonight."


She pretended his strong hands sliding up and down her arms had no effect. Truth be told, seismic waves scorched their way to the ends of her fingertips.


"Unless you want your boots wet, you'll leave me alone."


"Then meet me at the Cactus Club tomorrow at two." One corner of his mouth lifted. "You remember how to get there?”


"Sunday is my day for scullery maid duties." Her brain issued a stern warning. His tone of voice said he was glad to see her, but his eyes gave nothing away. Meeting him wasn't a good idea. Unfortunately, her heart wasn't in the mood to listen.


"Since when do you do housework?"


"A lot's changed since..." She bit off the sentence. Confiding in Cash served no purpose.


Letting him touch her had been a mistake. Did she pull away? Nooo. She stood there while his hands traveled down until his fingers twined through hers.


"I'll be there tomorrow at two. I hope you'll come. 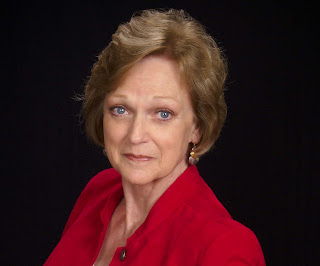 A student of  creative writing in her youth, Jerrie set aside her passion when life presented her with a John Wayne husband, and two wonderful children. A career in logistics offered her the opportunity to travel to many beautiful locations in America, and she revisits them in her romantic suspense novels.


But the characters went with her, talked to her, and insisted she share their dark, sexy stories with others. She writes alpha males and kick-ass women who weave their way through death and fear to emerge stronger because of, and on occasion in spite of, their love for each other. She likes to torture people, make them suffer, and if they’re strong enough, they live happily ever after.

The author of HELL OR HIGH WATER, THE LAST EXECUTION, THE GREEN-EYED DOLL, Jerrie and her husband live in Texas. She loves sunshine, children’s laughter, sugar (human and granulated), and researching for her heroes and heroines.