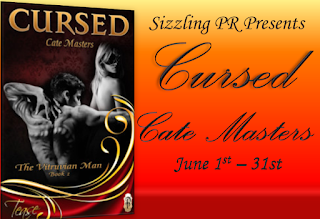 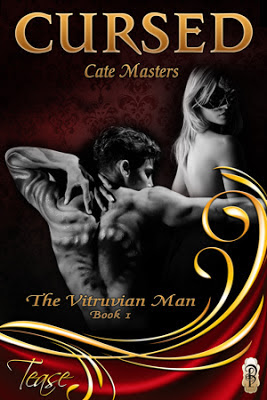 Blurb:  Bruno diCesare lives alone by necessity, not choice. An experiment performed by Leonardo da Vinci, who believed having a dual DNA would grant a person immortality, used magic to render Bruno a chimera – the head of a lion, body of a dragon. The only time he can mingle with people is during Carnevale, ten glorious days of masked anonymity, frivolity and intimacy.


Melina Weaver learned fire dancing to enliven her dull existence. A scientist, her long hours at the lab leave no time for a social life. For ten days at Carnevale, she can pretend to be someone else. Someone sexy and daring, who lives on the edge.


Once she meets Bruno, her wish comes true, but everything goes terribly wrong. Beneath Bruno’s costume lurks an alpha male, but is he dangerous? Worse, can she return to an employer who sells her research to the military to make an army of efficient killers? Her only hope may lie with the man she’s just met and never seen.


Light danced in his dark eyes. “I must admit, your fire dancing fascinated me. What made you choose such a dangerous skill to master?”


“The thrill of the challenge, I suppose.” It balanced the rest of her mundane life, to a degree. Mastering each new level gave her a sense of achievement, where work couldn’t.


Something flashed through his dark eyes. “Mistakes must be very painful.”


“I practiced a long time before I worked up the nerve to actually light the wands. I found the fire great incentive to focus, however.” God, her grin must be goofy, the way he stared. Such gorgeous eyes, such a deep brown they almost appeared black. He probably had rugged features, if his large hands provided any indication. Too bad he wore gloves, another barrier between them.


“What about you? What other magic do you know?” Oh please, can you get any more ridiculous? It sounded like a line from a bad chick flick.


The crinkle around his eyes was the only evidence of his smile, but enough to charm her.


“Lifetimes of studying the dark arts have provided me with many tricks.”


He stiffened in her arms. “Pardon?”


She watched him carefully. “You said ‘lifetimes’. Plural.” And what the hell did he mean by ‘dark arts’?


Rigidity masked the grace of his movements. “I’m sure you’re mistaken.” He stared over her head as they whirled to the song’s rhythm.


Mistaken my ass. How very strange. More strange that the question upset him. He’d clammed up, and his muscles were so tense, she expected him to bolt. Better to drop it. For now. “Must have been a slip of the tongue.”


“Yes.” Relief sounded in his tone, though guarded.


This man had something to hide. How intriguing. 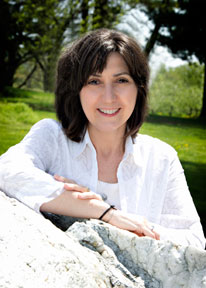 ABOUT THE AUTHOR:  Cate Masters has made beautiful central Pennsylvania her home, but she’ll always be a Jersey girl at heart. When not spending time with her dear hubby, she can be found in her lair, concocting a magical brew of contemporary, historical, and fantasy/paranormal stories with her cat Chairman Maiow and dog Lily as company. Look for her at http://catemasters.blogspot.com, and in strange nooks and far-flung corners of the web.


Cate loves to hear from readers. Email her at: cate.masters@gmail.com

a Rafflecopter giveaway
Posted by Unknown at 12:00 AM 2 comments: Links to this post 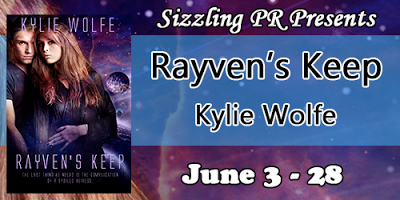 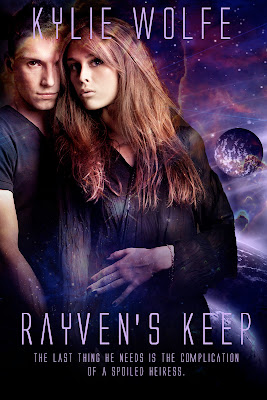 Kylie Wolfe
Tru Creighton wants her wealthy and powerful family to take her seriously. Sneaking away to investigate bookkeeping discrepancies from one of their holdings seems the perfect opportunity to prove her worth. Stranded on a hostile planet with a price on her head, she seizes her one opportunity for survival.
Nick Rayven, determined to build his reputation and fledgling security company, doesn’t flinch at difficult and dangerous missions. A former soldier and refugee from a war-demolished planet, he battles to create order and stifle his painful memories. His hard-won accomplishments are threatened when a spoiled heiress in danger awakens emotions he thought long gone.
Two people with plenty to prove risk everything to unravel their tangled missions. His sense of duty and vulnerable heart compel him to fight his growing attraction to her. Her heart demands she follow it straight into his arms. The people behind the conspiracy keeping them together and in harm’s way have other ideas.
CONTENT WARNING: Language & Violence
TAG: Drugs, murder, conspiracy, and a headstrong heiress complicate his covert security mission.
A Lyrical Press Science Fiction Romance
Excerpt:
The lights shut off, except those on the helm, casting eerie blue shadows on their faces. Tru’s apprehension rose as she tested her shoulder harness and fidgeted in her seat. She looked to him, and drew strength from his rock-solid presence. She didn’t know much about solar storms-- only enough to be frightened. She clutched the armrest.
“Impact in three, two...” Siren intoned matter-of-factly.
The invisible wave hit them and electrical sparks flashed over the ship’s nose, coming at them with terrifying swiftness. Blistering shocks pulsed along her skin and nerves felt as if they were on fire, burning her up from the inside out.
“Shields strong, life support holding,” Siren continued.
The ship bucked and lurched, snapping Tru’s head forward then back.
“Siren, how long until we’re out of the storm?” Nick demanded, while he continued to monitor the power to the shields and make rapid adjustments only he understood.
The ship’s engine groaned and metal screeched from the force of the storm. Lights flickered on the helm, sparks flying from wires affected by the solar pulses battering them.
“Hang on, Tru. We’re almost through,” he assured her while he swiftly rerouted connections.
Posted by Unknown at 12:00 AM No comments: Links to this post