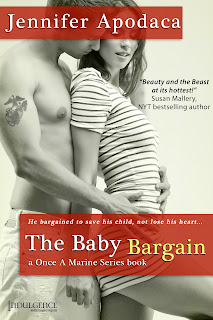 Seeing Adam Waters is the last thing veterinarian Megan Young expects. Ex-Marine. Ex-boyfriend. And still extremely dangerous territory. But Adam doesn’t know the secret Megan has been keeping from him. The secret that was created three years ago, after their last night together…


Adam returns to Raven’s Cove to sell his home in a final break with the town and memories that haunt him. The problem is that his attraction to Megan is as blazing hot as it ever was. But when a vicious smear campaign against Megan turns ugly, Adam learns the truth he never knew—he has a son.


Now the only way Megan can protect her child is to strike a bargain with Adam. And it’s a bargain that looks a lot like blackmail…

Buy Links:
Amazon – http://www.amazon.com/The-Baby-Bargain-ebook/dp/B00BQMKC5O/
B&N – http://www.barnesandnoble.com/w/the-baby-bargain-jennifer-apodaca/1114794877
Kobo – http://www.kobobooks.com/ebook/The-Baby-Bargain/book-vfUJ7eO_VE2K9094I8lILQ/page1.html
iBookstore - https://itunes.apple.com/us/book/the-baby-bargain/id616370377?mt=11&ign-mpt=uo%3D4
AUTHOR INTERVIEW.
*     For anyone who does not know the author , would you please tell us something about yourself?
I grew up in Southern California very close to Disneyland and attended Walt Disney Elementary School.  Years later, I met my husband at the dog pound—a story that cracks up our kids.  I was working there, and he came in to do an audit looking suave and sexy in a business suit. Obviously it was puppy love at first sight, LOL. We soon married and produced a house full of  boys (three sons).  I loved being a full time mom, but I needed something more, and that’s when I started writing.  I published my first book in 2002, DATING CAN BE MURDER, which was the first book in The Samantha Shaw Mystery Series. Since then, I’ve published over 15 books and novellas.
*. Who or what has been the biggest influence in your life and why?
There’ve been many people, my mom, sister and some teachers, but probably the most powerful influence has been my husband. I know it’s cliché, but having a partner in life who believes in you is empowering. That kind of support has given me the courage to go after my dreams.
*. Is there a question that you would like to be asked in an interview, but nobody has asked? If so, ask away.
I can’t think of any. Interviewers come up with a lot of great questions!
*  How many books have you written  in this name maybe ? What is your current wip ?
Under my Jennifer Apodaca name, I believe this is my 9th book. I wrote 5 books in the Samantha Shaw Mystery series, two stand alones, one novella and now THE BABY BARGAIN.
I’m finishing up the first draft of POSSESSION, a series I’m writing under my Jennifer Lyon name. I’ll be starting the next book in the Once A Marine Series, which is Logan Knight’s story. Logan goes home to his cabin on his family’s huge ranch, only to find it occupied by a woman on the run. I’m looking forward to writing that book!
* What gave you the Idea to write this Series ?
The Once a Marine series, thanks for asking!  I got the idea while watching news stories of soldiers returning home from battle to their families.  All those tender reunions got me thinking about the men and women who have no one to come home to. What is it like for them? I set out to create a group of strong alpha men who came home with emotional and/or physical scars from their service. My goal is to find the right heroine to help them heal and get their happily ever after.
* What inspired you to write the Baby Bargain ?
Once I came up with the series idea, I knew Adam, as the owner of the Once A Marine Security Agency, had to have the first story. But Adam has serious issues that make him believe he’s not capable of love, so I had to find the quickest way to cut through his defenses. I came up with the secret baby plot for THE BABY BARGAIN. For an alpha man like Adam, a child in possible danger brings out his deeply protective side.
* Have you written any of your characters in your book to anyone you know ?
Not specifically, no. I have used life experiences though. For instance, I’ve lost a brother so many of my characters go through losing siblings because I understand the emotions and issues that can arise from that.  Another example is my son suffered a severe injury to his leg about a year and a half ago, so my heroine is dealing with a similar injury in the series I write under my Jennifer Lyon name. But I don’t base an entire character on a person, for me, that just doesn’t work.  I want the characters to be whoever they need to be in the story .
* Anything you would like to share with the readers about your writing? Aka when do you like best to write and where?
I want readers to know how much I appreciate them. I wouldn’t get to do this job I love without them!
My favorite place to write is at my huge oak desk, but if I have to work at night, I sometimes switch to my laptop and sit with my husband in the family room. My schedule is so insane this year that I’m trying not to think about it too much or I’ll panic. But I get to do what I love, so I’m not complaining!
* Why do you write romance ?
Romance is what I love to read.  But more than that, the powerful emotions of love (lust, possession, anger, hate, friendship and so much more) can changed lives. Those emotions are such a driving force in people’s lives, I love writing about it.
Some Blitz Questions ...
Last Vacation
Went to Texas to see some friends.
Favorite Flower:
Hmm, I don’t think I have a favorite.
Last Movie You Saw:
Zero Dark Thirty
Last Book You Read:
AGAINST THE WALL by Rebecca Zanetti
Your guilty pleasure:
Chocolate in all its various forms.
Drink of choice
Coffee
Night or day
Day
Winter or summer
Summer
Lace or leather
Leather
Paperback or ecopy
E-copy
Id like to thank Jennifer for answering my questions today, Its always nice to get a little insight into an author.
About Jennifer: 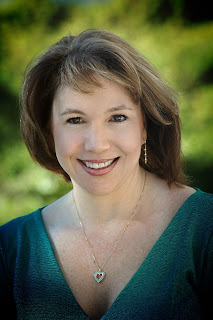 Award winning author Jennifer Apodaca grew up in Southern California and met her very own hero at the dog pound. She worked there, he came in on a business, and it was puppy love. They married and had three wonderful sons.
While her husband worked on his master’s degree, Jen did the mom thing by day and went to college at night with the intention of perusing a marketing degree. But her true passion was writing. With time at a premium, she had to make a choice.
Choosing writing, and with the full support of her husband, she poured herself into her dream. A mere eight years later, she published her first book DATING CAN BE MURDER. In her career, Jen has written a fun and sexy mystery series and a variety of contemporary romances. Taking the pen name of Jennifer Lyon, she also created a dark, sizzling paranormal series, and most recently, The Plus One Chronicles, an emotional and sexy adult contemporary series.
Jen has achieved many of her dreams except for attaining a self-cleaning house, a latte delivery service, and finding the holy grail of nonfattening wine and chocolate. She can live with those disappointments as long as she can keep writing the stories she loves to share with readers.
Where to find:
Website - http://jenniferlyonbooks.com/jennifer-apodaca/
Blog - http://jenniferlyonbooks.com/blog/
Twitter - https://twitter.com/Jenniferlyon
Goodreads - http://www.goodreads.com/author/show/146987.Jennifer_Apodaca
Goodreads - http://www.goodreads.com/author/show/2759175.Jennifer_Lyon
Facebook - https://www.facebook.com/JenniferApodacaAuthor
Jennifer is offering a $50 Amazon Gift Card to one lucky winner! Please fill out the Rafflecopter form below for your chance to be entered. Here is the rafflecopter code: a Rafflecopter giveaway