Blood of The Demon by Rosalie Lario Book Review


The blog Tour & Giveaways -  For Blood of the Demon starts today feel free to pop on over to Rosalie Lario's blog HERE  to follow the tour. Today I have my book review for Blood Of The Demon .. 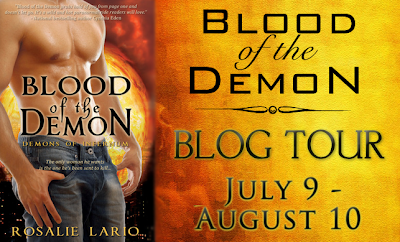 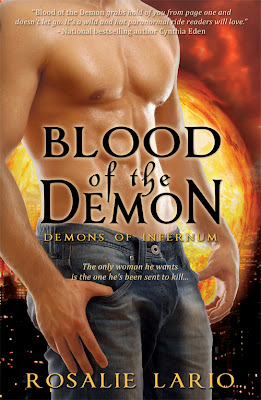 Keegan lives to exact revenge on the evil demon who sired and abused him. When his father devises a plan to bring on the apocalypse, he and his three half-brothers, interdimensional bounty hunters for the Elden Council, are charged with capturing and delivering their father for punishment.

Art gallery owner Brynn Meyers has no idea that her ability to read memories embedded in objects and drain people of their life force means she has demon ancestry. Unfortunately for Brynn, she's also the key to raising an ancient zombie army, which puts her on every demon's Most Wanted List.And no one wants her more than Keegan's father.Keegan must protect Brynn from his father by any means necessary, but he'll have to learn to harness the other half of his genetics-the far deadlier, uncontrollable half-when he starts to fall for the one woman standing between him and the vengeance he so desperately seeks. The one woman he'll never be able to resist.

Blood of the Demon was a fast paced read filled with Sexy as sin – Hybrids and Demons. . Lario created an intriguing storyline, with interesting characters, all created with their own personalities and abilities. Four brothers work as bounty hunters, they have been sent to Earth to find and recover * The Book of the Dead * before Mammon tries to start an apocalypse with the dead. ** Zombies** they must find the Heir of the Egyptian bloodlines – if the book is not found they must then deal with the forth comings.

Keegan is sent to retrieve the book, but upon meeting Byrnn is unsure if and when the time comes he will be able to destroy the Heir even if it means to save the world from Mammon. He found that his attraction to Brynn is like no other but as he tries to avoid that pull, he only finds himself wanting her more. The attraction between Brynn and Keegan is smoking hot!! Lario has put for this well, giving the reader - heat in all the right places ((wink wink))

Brynn is gifted – she can read ancient objects and also has the ability to project power from her palms. But upon meeting Keegan and his brothers she now realizes she is not alone in the world with her special abilities, that these men are not at all what they seem. Brynn is strong, and kick arse and Brave. I really enjoyed her character – She was not a whiny poor me character but put forth with Character and strength.

Lario has scripted her characters well, giving them all their own definition and depth in this read. The Demons of Infernum - is filled with all the goodies one could want in a paranormal read. Sexy moments, great storyline- intriguing plot, and a fluent and flowing storyline that will keep the reader intrigued till the very end. Lots of action, humour and banter thrown in to break up that dark side that lurks throughout and also with many vivid details, to also give the reader insight into the world in which she has created. I enjoyed the closeness that Rosalie has created between the brothers, this was heartfelt and also heartwarming and the connection she has entwined througout the story gives great depth into there relationship.

The plot for this book has been set up well, giving us detail to go with for future books in this series.

A fantastic debut for Lario and I certainly look forward to more of her books and the sexy hybrids that she has created.

Angels,Demons,Fae, and Sirens... A great blend of Smexiness and strength , yet darkness that lurks....

Be prepared to be drawn into the pages, and immerse hours later, sated, and content with The World of Rosalie's Hybrids - Demons scurrying through your thoughts. Sexy men will always linger a little while longer (( snickers ))...

Posted by Unknown at 11:43 PM No comments: Links to this post