Id like to Welcome Felicity Heaton to Page FLipperz today !! I have asked Felicity a few questions and wanted some insight her author life, and as a bonus  Felicity has donated a Swagaliscious pack to one lucky winner !! 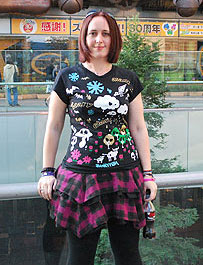 
Felicity Heaton is a romance author writing as both Felicity Heaton and F E Heaton. She is passionate about penning paranormal tales full of vampires, witches, werewolves, angels and shape-shifters, and has been interested in all things preternatural and fantastical since she was just a child. Her other passion is science-fiction and she likes nothing more than to immerse herself in a whole new universe and the amazing species therein. She used to while away days at school and college dreaming of vampires, werewolves and witches, or being lost in space, and used to while away evenings watching movies about them or reading gothic horror stories, science-fiction and romances. 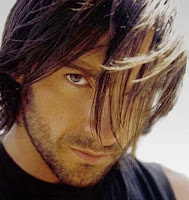 ﻿
Whom is your favourite male character in your books and why?
It’s no secret that I’m mad for Valentine from my Vampires Realm series. He was the lead hero in the Prophecy Trilogy and I fell hard for the dark, deadly and downright sexy vampire when writing him. Second in line to him is Aleksandr from Heart of Darkness. Aleksandr put up a good fight and might have knocked Valentine off the top spot in my heart, but Valentine held firm. After those two hotties, it has to be Julian from Love Immortal. Together they make my trifecta of bliss.
You love to write romance - are you a true romantic at heart?
I like to think I am. My husband would probably say that I am and would mention that I ensured our wedding vows said for all eternity rather than until death us do part. I cry at romantic movies and books, bleed inside for my characters when I’m writing a new story, and believe in eternal love. I guess that makes me a true romantic.
You wake to find yourself tied gagged and helpless in a chair in a dark room. A shadow is watching you from afar and you can see his silhouette. He is tall, big and his eyes are glowing red - you can hear him breathing - what are you first thoughts?
Boy, I hope he’s a vampire and gorgeous.
After that, I’d probably panic a little... and then if he emerged from the shadows and was as hot as my vampire heroes, I’d probably start trying to lure him over with saucy smiles and come-hither looks.
Can I just say, you have a dark mind...
Some fun questions...
Describe yourself in five words
Passionate, headstrong, stubborn, determined, caring
Cakes or muffins or slice?
I do love cake. I’m very good at baking.
Tea, coffee, soda or poison of choice?
Tea. That shouldn’t come as a surprise to anyone reading this. I am British :)
Night or day?
Night. I’m not being cliché. I have always been a bit of a night owl. I like the peace that you can feel even when inside. Everything feels so still.
First thing that comes to mind when I say VAMPIRE?
Bite me! Please?
First thing that comes to mind when I say WEREWOLF?
Can I stroke you?
Walk, or fly?
Walk, unless there’s an angel involved. I could be convinced to go for a flight in his arms.
Thongs, sandals or joggers?
I had to go look the last one up. Lol. I knew what thongs and sandals were to Australians. Joggers were new to me. Pretty much joggers. I like skate shoes and trainers. They’re so comfortable and I tend to walk fast so need shoes that stay on and don’t hurt my feet.
Chocolate - white, dark or original?
Dark all the way!
Favourite season of the year?
Autumn. The leaves turn beautiful colours, the air is fresh and crisp, and the sunsets and sunrises are magical.
Socks or slippers?
Socks.
Last but not least, your favourite movie or TV series?
Favourite movie is probably The Lost Boys but I adore so many movies. I’m a real movie enthusiast. Favourite TV series at the moment is The Vampire Diaries and I really like True Blood too.
Big thanks to Felicity today for answering some of my questions. Here is Felicity's latest book Ive read it and loved it the review can be found on my blog !! 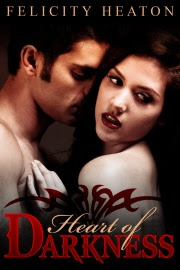 A vampire prince on a four hundred year old mission to avenge his murdered sister...

Aleksandr Nemov won't stop until the last of the vampire hunter’s progeny is wiped from the Earth. Each kill has stolen a piece of his humanity, pushing him towards the black abyss all vampires hold within their hearts. Now he is teetering on the edge, close to devolving into a beast, and time is running out as he tracks the last hunter to Prague. There he finds a beautiful woman who could be his one chance for salvation, but is it already too late for him?

A vampire guard who will do whatever it takes to protect those she loves...

Elise is dedicated to her duty. It's the only thing she has left. All that changes when she meets Aleksandr in Prague and her master grants him permission to stay at her bloodline's mansion. She knows all about Aleksandr but none of it prepares her for how she feels when the legendary prince's hunt becomes one for her heart. Elise battles him with all of her strength but can she stop herself from falling for the handsome hunter? When he reveals the depth of the corruption in his soul, will she have the strength to face the pain in her past and do whatever it takes to save him?(
Heart of Darkness is currently available in e-book from my website, Amazon Kindle Stores, Apple iBookstores, Barnes and Noble Nook Store, Sony Reader Store, All Romance eBooks, and Smashwords. It will soon be available from Kobo Books. It is also available in paperback at amazon.com and will soon be available at other Amazon stores worldwide and Barnes & Noble. 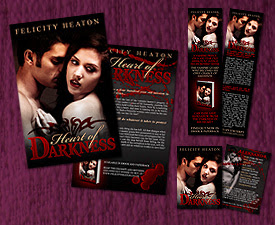 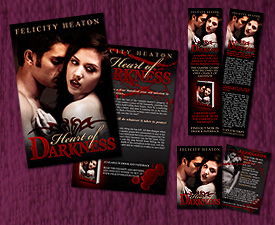 GIVEAWAY TIME..
All the above swag can be yours !! Just leave me a comment telling me how you like your heroes !! Comp will run for one week and Random org is used to pick the winner GOOD LUCK !!
Posted by Unknown at 12:00 AM 6 comments: