A Warrior's Witch by Stacey Kennedy

A Warriors Witch ( An Otherworld Romance is a spin off from Stacey's previous series - The Willow - The Magical Sword Series .)  In this book we travel with Zia - The Master of The Witches and Talon - The Master of the Guardians to discover who murdered Whitlyn a former world Guardian, we  also find Talon redefining whats important in life.
Here is the Gorgus Book cover ** Cover Love ** and the Blurb ,,, then my Thoughts ;) 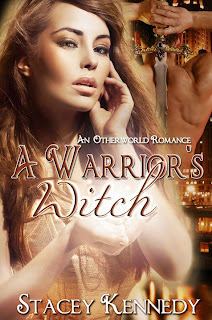 Murder has brought Talon, Master of Guardians, as well as Zia, his witch and Master of Witches, to Chicago. The manner of death appears to be a suicide, but Talon is far from ready to close the case. To avenge the Guardian linked to his past, he agrees to take on the assignment, and find her killer.

Review ;)
I have not read Stacey's previous series with these characters, so the past relationship between Talon and Zia I am blind to. But saying that, it didn’t affect the way in which I enjoyed this steamy romance - suspense at all. It contained a great balance of Action and romance, traces of humor and a well paced and certainly intriguing storyline with a twist... ** wink wink **


Stacey delivers poetic emotions, one that will leave you sad and teary, humor where you find yourself giggling, ** looks around to make sure no one was watching ** love, sadness and happiness. Scenes in which you can envisage and fluent flowing dialogue. The romance, and action where equally balanced not too much of one or the other, evened out nicely for the reader to enjoy!


The Main characters radiate enough heat to light there fires, let alone yours too!!!! The love is sweet, full of chemistry and taken to another level in this story.
A Warrior's Witch is filled with a tortured hero, who has qualms with himself and a strong willed heroine whom I’m sure you will fall in love with. A great cast of characters I’m sure you will enjoy.
I really enjoyed the storyline.. it contains enough suspense to keep your interest piqued right till the very end.
Stacey Kennedy is an author I will continue to follow and read and enjoy !! Stacey has many books out - With stunning covers and great stories do pop on over to facebook and check them out !! Links below !!
4/5 stars !
Find Stacey on Facebook > Facebook Author Stacey Kennedy
Posted by Unknown at 3:47 AM No comments: Links to this post