Well I was lucky enough to have been given a copy of Dirty Blood by Heather  and I must say I loved it !!! A refreshing new storyline, filled with suspense, murder, mystery and of course that Hotty we all love to love !!! Here is my book review ! and blurb !! 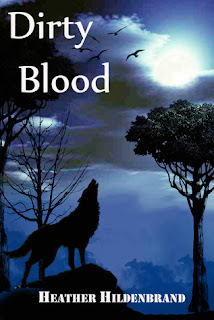 I killed a girl last night. I did it with my bare hands and an old piece of pipe I found lying next to the dumpster. But that’s not the part that got me. The part that scared me, the part I can’t seem to wrap my head around and still has me reeling, was that when she charged me, her body shifted – and then she was a wolf. All snapping teeth and and extended claws. But by the time I stood over her lifeless body, she was a girl again. That’s about the time I went into shock… And that was the moment he showed up.


On a cold frosty night Tara finds herself abandoned and no way to get home, so she decides to catch the bus. On her way to the bus stop, she finds a young girl shivering uncontrolably, and Tara approaches her to offer her help, the young girl bolts towards her and  changes into a wolf.
A wolf with snapping teeth, large claws and one whom wants   to kill her.  Tara reaches for the only weapon she can find a large pipe and hits the wolf. Now lying beside Tara, motionless, Tara realized she has killed the wolf- and the young girl’s body has returned. Tara mesmerized and shaken, hears a voice , turns and finds herself looking at a young man, who is offering to help her despite the fact that she has just committed murder.
Wes takes Tara home, and in time introduces Tara to a world she did not know existed, tells her things she never dreamed off and also tells her she is a HUNTER.
Wes is mixed breed, part hunter, part werewolf and due to his Genes he is  able to change into a wolf. Tara and Wes find themselves magnetically drawn to each other, an attraction unexplained, yet electricity that flows like a thunder bolt and lightening.
Wes takes Tara to meet his friends, where *The World of The Cause* is explained, the cause being that Werewolves and Hunters to unite and be at peace rather than be at war, and to only kill each other.
Tara finds herself in danger; someone is trying to kill her, reason unknown. Wes takes upon his protectiveness for Tara to protect and kill whoever tried to harm her. Their life is thrown into a world wind and visions are put forward, will Tara be the destiny they all seek??
Tara now realizes her life is not at all what it seems, filled with lies and a bubble her mother had created to keep her safe, but in the long run will this bubble get Tara killed ?
My Review. !!!!
Within settling down in my comfy spot, I was completely drawn into this story and sucked in within the first chapter. The suspense, and mystery started early in Dirty Blood, only to find myself mesmerized and intrigued by such an interesting idea.   I really enjoy it, when I find I can’t put a book down, just by being purely focused on what’s going to happen next and how the plot will unravel.
Well, Wes was introduced early in the story so of course, the heart starts to flutter, and I’m sure just like Tara’s did. ** giggles ** I found  Wes a yummy, ** swoon ** well the material we all enjoy in a story. ** Hawt ** He was kickarse, protective, and totally alpha material. I found his character to be bold, and assertive yet with that soft side to him and of course with a bod like that !!! We can only envisage how hot he was!!!
Where Tara was concerned, Wes would have died just to protect her.  The attraction between Tara and Wes was sensual, mesmerizing and certainly electrifying. The connection they had was romantic, and heartfelt, both equally feeling what the other thought. Two butterflies in unison... ** Heart flutters**
Tara was pig headed, determined, quiet often almost getting herself killed due to it, but she only wanted  to just lead her life the way she wanted and not to be dictated to.In  the end, her true Hunter came out and not only became evident she had a  gift, but also showed everyone she was cable of doing. Her attraction to Wes was very girly, lovey dovey, but quiet romantic and made you grin at moments. I enjoy a little romance, and this story did not go overboard with this, just the right amount to get your heart fluttering and keep you intrigued.
The plot was - wow -  fast paced, chapters flow  smoothly from one to the next and even at the end, as disappointing as it is to see the story end, I didn’t feel like I had been jilted and nothing had been left out.
Like I said from the first chapter ,I was hooked, line and sinker, and just get reeling it in till I finished it. I enjoyed the fresh storyline that Heather created, certain  werewolves that  have extra gifts, talents and also the  building a world where Werewolves and hunters could unite to live in harmony and work together. A cause I think was justifiable and  once again refreshing .
Of Course we need our Villains. ....The villains played their parts well, hating to hate them, lol..  Fight and action scenes were great, and even giggled when Grandma strutted her stuff !!!!  She was one new age lady !!! She was definelty not what you would think in your normally every day granny , this was a hoot.

I was  relieved at the end, being the reader I am, the story being  left open for more rivalry in book 2. ((I hope)) Descriptions well placed and I could envisage whilst reading !!  Im a visual reader, and I like it when I can see scenes taking place and even character descriptions. I suppose it takes me into that part of the book !
I enjoyed  all the secondary characters, falling in love with Wes’s adoptive parents, and all the characters,they fitted in neatly in this paranormal story, to give us that fix we need forsuspense,  mystery, action and romance. A well delivered story that will certainly keep you on the edge of your seat, grasping for the next page just to find out what’s next!!!!!
Overall I felt like the climax was well delivered, it had me slightly apprehensive, eager, keen and wandering where Heather would take it, but being a reader I was happy with the conclusion.
An intriguing, and mesmerizing, tale of werewolves, and hunters, unique of its own, a whirlwind of mystery and suspense, that will have you contemplating till the very end.  An ending unpredictable by any means.