I was lucky enough to have received a copy of SLow Burn by Ednah Walters and I must say I loved it ... Read it before bed then during lunch break at work and had it devoured in less than a day ;) Here's the book cover and blurb and my review ;) 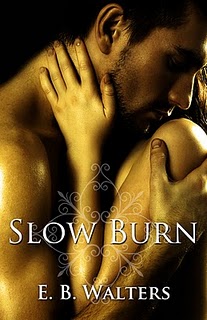 Hot cover right !! I am a cover love girl and the cover and whats inside doesnt dissapoint !!

She doesn’t want to deal with the past...

Ten years ago, Ashley Fitzgerald witnessed the death of her parents in a tragic fire and blocked the memory. She pretends to have moved on, is a successful artist and photographer, until the morning she opens her door to a stranger she assumes is a model and asks him to strip to his briefs .

He wants to expose the truth....


Wealthy businessman Ron Noble has the body, the jet, the fast cars and the women, but he hides a deadly secret. His father started the fire that killed Ashley’s parents. Now someone is leaving him clues that could exonerate his father and they lead to Ashley’s door. Blindsided by the blazing attraction between them and a merciless killer silencing anyone who was there the night of the fire, Ron dare not tell Ashley the truth. Yet the answer he seeks may very well tear them apart.

Demented Arsonist – Talented Artist – Firefighter who wants the truth exposed- will the truth find its way, or will they find themselves buried with it?

Ashley Fitzgerald witnessed the death of her parents in a tragic fire on her 15th birthday, for ten years she has blocked all memory of that horrid night. Ashley has chosen to move on with life, paint to her hearts desire, photograph what she loves and deal with the nightmares that hold the truth.

Ashley is a successful artist-photographer, living her life with no added complications until one morning her male model turns up at her door and she asks him to strip to his briefs, ready for a session, when he informs her that he is not who she thinks he is.  He is indeed the son of the man who died saving her from the fire in Calyle house 10 years prior.Ron Noble.   Ron believes the fire may have been deliberately lit; Ashley just wants to move on, she has accepted what has happened.

Did someone kill Ashley’s parents? Was the fire set deliberately?

Ron wants to expose the truth, and he needs Ashley on his side, to do so.

Ron Noble wants to find out what happened that dreaded night.  Ashley understands his pain they both lost loved ones, feeling drawn to Ron not only for his charming ways, but feels maybe it is time to find out the truth...  Ashley agrees to help Ron, the electricity between them is sizzling, they both feel it, but as secrets are unraveled, mysteries divulged, they find themselves in a whirlwind of turns and twists they could never have imagined. People on the list are getting killed, the toll is getting higher and more is at stake that then could ever have imagined.  It’s left up to Ashley to remember details of the accident something that will change her life forever.

I must say this romantic thriller, was filled with twists and turns at every corner. I was intrigued from beginning to end with this read, and at one stage I felt like a crazed reader, flickering through 100 miles per hour just to find out whom, what, where and why!!!

A suspenseful thriller- romance that will leave you bewildered, guessing and wandering who the killer was, and why.  An unpredictable plot by any means, suspense that will leave you gasping, unexpected events that will bring tears to your eyes; make you fume at events that take place, and also making the plot both intriguing and memorable. Chapters flowed smoothly,  the plot was fast paced, and kept the reader interested throughout from beginning to end. I felt not a thing was missed or rushed...

Slow burn was filled with luscious sensual love scenes, that not only will have your toes curling, eyelashes fluttering, but your heart racing like a bird in flight. Moments where you will find yourself grinning with amusement at the funny antics between the characters, and  moments where you heart is being played like a marionette and scenes where you want to just jump into the book.

The main characters were well developed, Ron – was charming and flirtatious, cocky, and hot to trot, rich and successful business man  and every womans ideal dream boat -  yet he  also has his own vunerabilites, this showed the reader he was not that perfect hot firefighter, that he also had issues he had to deal with. Loving and caring and sexy an idealistic hero for all. A tortured soul to a certain extent.

Ashley was hot headed in the way she spoke her mind  and independent, caring and considerate, but also I enjoyed her straight forward character, she liked the truth and believed to give it at all costs. She was passionate about her work and the ones she loved, determined to do what it took to keep the ones she loved out of danger.

The blazing attraction between Ron and Ashley was mesmerizing, tantalizing and passionate. Sex scenes were sensual and loving, electrifying- if you make call it, yet at times also dreamy and transient.  Their love was portrayed, tastefully and emotionally giving a good insight to their feelings. Both the good and the bad moments.  The descriptions in this story were Fluent, expressive and rhythmic well above defined, there is nothing quite like reading a book and being able to envisage scenery, scents and smells.  I am one for great descriptions and this book does not disappoint.

Secondary characters all blended in well, nothing missed out and even the villains were portrayed as noxious, and demented. Definitely incalculable.  Making you dislike the character. The other characters, loyal and faithful, and heartfelt.  I enjoyed all the characters in Slow Burn, each and every one unique and necessary for the plot to unwind.

Overall, I must say, I had Goosebumps by the end, Held my breath and hoped for the best ….  I am a dramatic reader, but you know when you have read a good book when it pulls at your emotions and when the end is done … you sigh! And breathe… I’m sure I held my breath last few chapters..

A capricious read !!!! I’m sure you will enjoy.
Look forward to reading more of the Fitzgerald series.

Slow burn can be brought at smashwords,
Amazon and Barnes and noble in all formats ;)

Posted by Unknown at 9:01 AM 4 comments: Links to this post