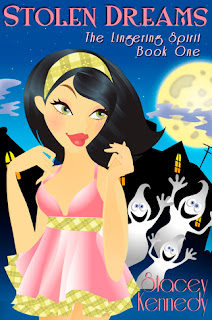 I brought Stacey's new book on release day and devoured it the same day.. I must say I was impressed.. ;) a different kind of love story, and human falls in love with a ghost,, but their is more to the story. ....

Ok the cover is cute !! But dont be detered buy it !Im not saying that in a bad way !!! I am a bad one for cover love !!! This one I thought hmmm -  but after devouring it in one sitting I was not dissapointed !! ! I  read the blurb and thought this sounds great !! So I lashed out and brought it and it was fantastic !!!.** I know never judge a book by its cover ** !!! Honestly it caught my eye ;) and never imagined the story to be what it was ! !wow  ***********************************************************************
Stolen dreams is about a girl named Tess Jennings whom  in a fatal car crash, almost died - her life was spared to be awakened with  a gift – a gift to some but not to Tess. Tess has a very placid life, no animals, a job that pays well, and that she doesn’t mind, a best friend she adores and a pretty quiet existence. However Tess is haunted by ghosts who need closure, and who want to be at peace.  For the rest of her life, she will be harassed by ghosts who need her. A gift she really doesn’t feel she is blessed with until she meet Kip McGowan.
Tess comes across Kip McGowan at Starbucks, she proceeds to ignore him, he is very annoying and persistent, and he follows her to work, home and even a night out, in which Kip tries to seduce her with dirty talk.  Tess finds herself out of control and aroused   and very confused no man has ever made her feel so alive. But he is dead and he is a ghost- but a dam hot one at that!
Tess is confused, how can a ghost excite her so much. She continues to ignore him till she no longer can. Kip McGowan is a ghost-   a police officer killed in the line of duty. Murdered. He is after his killer – the same killer who also killed Hannah  Reid five   years prior. Kip was working on a cold case with his partner Zach and needs to get information to him and the only way he knows how is through Tess. He has information that may just catch their killer. On a whirlwind Tess finds herself working with the police force and Kips Partner Zach to hunt down a killer and find everything they can.  Feelings grow between Tess and Kip and they both know it should not be, in time Kip will have to leave, their love is doomed from the start... Or is it?  Tess questions herself and sanity should she be feeling this way towards a ghost and how will she survive without him when he is gone?
Wow!!!!
I must say this is the first book I have read of Stacey’s and I was mesmerized. The chemistry between Kip and Tess was smoking hot!!!  I found myself giggling at bits,  * blushing if you may * at Kips witty comments. He had me mesmerized with his tarty and suggestive comments.  Tess was in a turmoil of her own  not being able to control herself with such a spunk of a character- hot – taut and buffed !!! ** swoon * .. I enjoyed the seriousness in parts but also the parts in which the lightness of the story line was also brought about. I cackled to myself in one part they were out searching the then men where referring to certain parts of the anatomy, I could almost visualize Tess’s horror and humor all at once. Moments like these enlightened the dreary ones.   The character development was amazing all well described and blending in well together. The story line fluent, chapters all flowing smoothly into each other. Stolen Dreams a love story- thriller filled with mystery and intrigue that kept you on the edge of your seat, gasping for the next breath and other moments that scorched the hairs on your lashes. The sex scenes were sensual, romantic and tasteful and intriguing if you may call it... This will make more sense when you read the book... A story filled with all the goodies you need for a suspenseful thriller- a hot ghost full of wit, humor and love - compassion and his   discovery for a life he never knew he wanted.  An unappreciable read, right to the very end. I enjoyed Kips character and found myself to falling for his unselfish thoughts, his compassion for Hannah and is overall moment when he realized he was a ghost.  I found myself  sniffling towards the end, I didn’t want it to end, but when the end came , I was relieved to know there is more to come ..
Stacey Kennedy on facebook  - http://www.facebook.com/profile.php?id=100000956942180
Posted by Unknown at 10:37 PM 2 comments: Links to this post

My Review for Laney *Brookhaven Vampires* by Joanne Sowles.

Well what a week I have had so many great books and a few reviews I have decided to post.. Please do keep in mind when reading my reviews that this is my opinion of why I enjoyed the book ;) I am not an author - writer just a avid book lover.. So this week for Review up first is Laney... 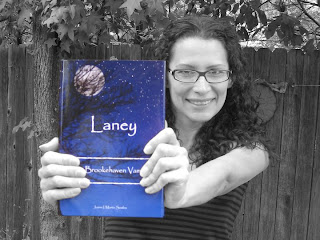 BOOK BLURB****
What would you give to be with the one you love?

Would you give it all, including your life? In a small college town in Northern California, Laney Alexander leads a regular, uneventful life–that is, until the charming and alluring Oliver Knight enters her world. Who is this gorgeous and mysterious stranger? Or, rather, what is he?

As Laney’s sophomore year of college begins, so does an unbelievable adventure–including a love she didn’t know she longed for. She soon learns that Oliver is not ordinary, nor is the rest of his family, including a sister who openly hates her and a brother who will stop at nothing for revenge. As she fights for her life, and Oliver’s love, Laney discovers that the fictional world of vampires isn’t so fictional after all. Nobody is safe, especially Laney, Oliver’s most important priority, and he will stop at nothing to protect her. With her mortality at risk, and a commitment revealed that she, without a doubt, knows she wants, Laney’s life takes a thrilling and terrifying turn…

Laney Alexandra lives a normal life, in a small cottage town; she lives with her best friend Kiera and has moved out of home away from her Aunts to live her own life. Her first day back at college - she meets Oliver Knight, dreamy, charming, mysterious and incredibly good looking and Laney finds herself mesmerized by him, - his good looks and green eyes draw her in.
Laney is in her sophomore year, and this is where her adventures begin. In time, her and Oliver spend time together and fall for each other. Oliver is witty, charming and makes Laney’s heart skip a beat, she is drawn into Oliver’s world. He is not who she thought he was …..
His sister - Goth princess doesn’t like her, his family has secrets she is not so sure about, and his family all seem to be different. Oliver’s brother hates him and is out to make his life hell and life is not at all what it seems.
Oliver’s charms and whoos Laney, she falls head over heels for him vice versa there love is magnetic, magical and romantic... Lovey dovey if you may call it . Oliver would do anything for Laney; even die for her in order to protect her – but from whom and what and why?
In time discoveries are made and Laney is thrown into a world she didn’t know existed, vampires are real not a fairy tale, werewolves roam the earth and evil exits in minions. Will Laney give up her mortality to be with the one she loves, or will evil get there first and destroy it all? Oliver will stop at nothing to protect Laney from the evil that lurks. Can’t he protect her from himself, and the commitment he is willing to give? Will she be the one to give up her mortality to be with the one she loves? Turns of events change and things become a turmoil will Laney survive long enough to be with the one she loves for ever ?


I really enjoyed this book at first I thought it reminded me of Twilight, certain things seemed familiar but in time IT WAS NOTHING like it, references were made I found amusing eg they watched Twilight on there movie night - but Laney has its own storyline and you won’t be disappointed. I was giggling at certain parts, and grinning and this alone was enjoyable when a book can make you feel like this while reading - its done its job !!!
Oliver’s character is full of emotion and is very protective of Laney. He does not come across as wanting to eat her, ((aka Twilight) or any normal vampire book or movie he doest not want to devour her just the love he shows her is incredibly romantic and sweet and honestly this melted my heart alone. * SWOON * They are adults in college so this part is realistic in its own way. The love is cute, lustful and very dreamy. Laney knows what she wants and will get it - but at the same time relies upon Oliver to be her protector. The vampire in him does not scare her it excites her, this along is a challenge for Poor Oliver.
The characters introduced into the book I really enjoyed - Felix I envisaged ** swoon ** and other characters blended in well with the storyline and were well described- They created the world in which Joanne has made in the Brookhaven Vampires. The chapters flowed smoothly, fluently running from one to the next, the storyline evident and not predictable. The chemistry between Laney and Oliver was explosive, and very realistic. Joanne created he own vampire world, her own myths behind the vampire world. This I found enlightening and different I enjoyed it. Action packed, with romance, thrills and lustful moments, great characters, and plot. The only downfall I could find in this read was grammar errors, but this by no means detered me from liking the book. I am looking forward to book 2 in The Brookhaven Vampires series.
:)I look forward to more of Joannes books ;)
Brought in e format but will definetly buy the book to shelf it and read again !!