With cyclone Yasi  nearby I bunkered myself  in my chair and brought the last book in the *Truth series* by Amy Romine. I really enjoyed the first two and today being the release day I decided to delve in buy it and read it .. and I must say I was not dissapointed.. ** Happy dance ** 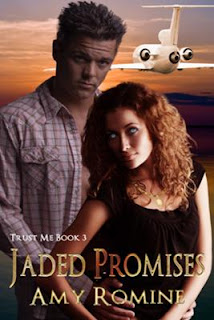 He told her to let go, she did and his world changed forever
Eric Stiles has everything to lose and no matter how hard he fights he can feel his life slipping away.
Rebecca Gailen thinks that the love of her life is dead and only the vigor of revenge keeps her fighting to survive.
When a secret reveals more than anyone expected, it changes Eric and Rebecca’s lives forever. The devastating truth puts the couple at odds. Can they overcome their clashing conclusions and learn to trust each other again? Or will they let it rip them apart?

Rebecca Galin thinks the love of her life is dead, and the only thing keeping her going is her revenge for him and to get through the living hell she has been in - To escape and survive.
Eric is alive and wandering where his life is going, his new life is crumbling beneath him, will it get swept away, amongst the turmoil and destruction in his path to be able to live the life he never knew he wanted.
A secret is revealed, a mind blowing discovery that will change Rebecca and Eric’s life forever. Who can she trust, where can she go and who can she turn to ? Is blood thicker than water ?
Rebecca is kidnapped by the men who want  the mysterious locket, the men behind the phsco that made her life hell- her life is in danger, she is beaten and tortured and abused  she stands her ground and  her will is to survive.
Eric her knight in shining amour is out to find his love of his life, no matter where she is he will find her and save her from this hell she has been through.  Rebecca struggles on; to find out who wants her dead and why- and why- this mysterious necklace is ruining her life.
Wow!! Is all I can say, Jaded Promises is a fantastic ending to the trust series. It is filled with mystery, murder, family, trust, luscious sex  and lies and keeps you gripping your seat to the very end. It’s filled with twists and turns you would never have imagined and keeps you guessing the whole time.  I was blown away by the revelations that became about. Gob smacked I might say you would call it!!   I was kept intrigued throughout the entire story, rapt and drawn into this whirlwind of events. The twists and turns I never expected, the suspense almost killed me... I was taken aback by the dramatic disclosure and events that became about - thinking oh my gosh!!!! NO !!!!  I did not expect this-  I enjoyed this book not being predictable as it defiently was not !
I was still mesmerized by the love in which Eric and Rebecca still held onto through all there dilemmas.  The love was sensual, lustful and magical., the sex was hot yet classy and their feeling well described. They went to the end of the earth and back and love still conquered and found its way!!
Eric ** heart throb** was definitely my ideal knight in shining amour, always there for Becca , the emotions realistic as in every day life . I found the emotions realistic and very genuine... I enjoyed the way in which Amy showed the feelings, it was like poetry.
Rebecca’s character I enjoyed she had her moments but still stuck to her kick arse red head attitude ** FIREY AND STRAIGHT FORWARD AND INDEPENDANT  ** I enjoyed her tough exterior immensely but also liked the fact that she was only human and had her moments,  very real and emotional ,I felt I was their at certain parts, I was feeling torn with her .  One can only take so much -This being  Realistic in everyday life once again.
Overall the storyline was fluent, face paced, and smooth, the dialogue flowing and the storyline consistant and never lacking a dull moment. I could just not put the book down! New characters were introduced and past books and information all flowed from book one through to book 3.  Mild sex scenes very beautiful and sensual  -  the sex does not overtake the storyline, just gives it that little bit of excitment very sensual and thrilling.
Overall a powerful thriller with that lush and sensual romance entwined......
I am sad to see this series end but I did not feel the story was left hanging Amy ended it with everything concluded and not that feeling that you thought something was missing.
Here is Amy's blog
http://www.amyromine.com/
Twitter link ;)
http://bit.ly/fmBm6v
Facebook page :
http://www.facebook.com/?ref=home#!/pages/WritesRomine-Suspense-for-the-Romantic-Heart/131944350177401
All books are short reads, filled with romance and suspense but worth the read !!  They are sold as E format ;)  and can be purchased at several sites please do look on Amy's blog if you are interested ! You wont be dissapointed !!
Posted by Unknown at 4:26 AM 8 comments: Links to this post