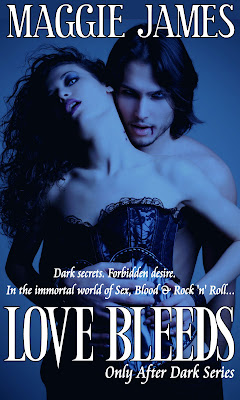 Book Blurb:
There’s no such thing as vampires…
Straight-laced Katarina Renót is well educated, logical and doesn’t believe vampires truly exist. But when a well deserved holiday in Europe turns into a torrid game of cat and mouse with a handsome stranger and her best friend is exhibiting signs of being allergic to daylight-Kat doesn’t think her life can get any stranger.
Every man has a weakness…Even an immortal…
Joseph Markus is an arrogant, wealthy entrepreneur who spends his free time as the raspy lead singer for the rock band “Slang” and seducing beautiful women. After decades of mourning the tragic death of the only woman he ever loved, vying to save his best friend from an unrelenting death wish- now he is accused of being a murderer.
An undeniable twist of fate…
Kat learns her Prince Charming is actually the “Prince of Darkness” and though she can’t resist falling for this sultry vampire, she still lives in denial. But when the lines are drawn, and Kat finds herself caught in the middle of a deadly plot for revenge she has only one choice--trust the seductive vampire who has captured her heart.
Despite his own arrogance, Joe finds himself inexplicably drawn to Kat. Her stubborn will to resist his seductive charms coupled with her endearing naiveté prove to be more than he bargained for and Joe soon realizes he is in way over his head.
But will love be enough to save their immortal souls from the grips of a twisted obsession?
Amazon book listing: http://www.amazon.com/dp/B004QWZ850
Amazon U.K book listing:   https://www.amazon.co.uk/dp/B004QWZ850
Barnes & Noble listing:  http://search.barnesandnoble.com/Love-Bleeds/Maggie-James/e/2940012187390
Smashwords listing:  http://www.smashwords.com/books/view/45777 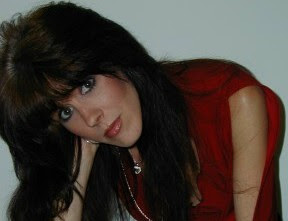 Author Bio:
Born and raised in Central New Jersey, Maggie James is a proud 'Jersey Girl' who still resides there with her husband of 23 years and their children. Maggie prides herself on being a wildly romantic "Jersey Girl" with a passion for vampires, rock music and romance novels. She successfully combined these 3 elements in "LOVE BLEEDS" her sexy new tantalizing paranormal romance, the first installment in the Only After Dark series. (Book Two coming soon!)
Maggie writes what she loves to read--Sizzling romantic novels containing the dark, mysterious and handsome alpha male and the strong willed, die-hard souled heroine who, despite her better judgement, can't resist him. Their worlds collide and you can't help yourself from being swept away into their irresistable world of passion and chivlary; heartbreak and reconciliation.
You can follow Maggie on Facebook, Twitter, Blogger to keep updated on her newest & upcoming releases. Please feel free to leave a comment...Maggie loves to hear from her readers and fans!
Blog link:  http://maggiejames-author.blogspot.com/
***************************************************************************
I was lucky enough to have been given a copy Of Love Bleeds by Maggie James and found it an enjoyable read.
My thoughts:
I read Love Bleeds in almost one sitting, an enjoyable read, filled with Vampires, hot sex scenes, and a storyline revolving around the main character Joe. I found the storyline quiet slow at the start, due to the influx of characters. A lot of new characters introduced all at once, but  After the first few chapters, I found myself getting into it and wandering  with interest where the storyline was headed. An average vampire story, with sexy vamps ** wink wink ** , murder, lust, smexy sex scenes and several POV's throughout this read. The characters were likable , I found I  read at a steady pace, following the fluent chapters and plot was easily recognized. Action, sexy rockstars, sensual loving, scorching moments that will singe your eyelashes, overall a read I enjoyed. This book contains great potential for the second instalment of the Only After Dark Series, where I am sure that Maggie will blend through aspects from book one to give us an enlightened book 2.
Posted by Unknown at 7:50 PM